The Shirelles played a huge part in creating the girl group genre and bringing black music to white audiences, but by the time the Beatles covered two of their songs, audiences are opting for new acts. Still, the Shirelles kept at it, releasing singles and albums into the 70s, as this 1972 album shows (which reportedly is better their previous RCA album from 1971).

Their classic songs from the late 50s and early 60s were as much R&B and doo-wop as pop, so it shouldn’t be surprising that this outfit were able to update their sound and fit in with the soul music of the early 70s. This set features Shirley and Micki (who were both there from the beginning) and focuses on soul numbers from 1971.

Not surprisingly, they start the set with a then-recent Carole King number, “Brother, Brother” (not surprising because their relationship with King goes back to the beginning). This version seems to be a mix of King’s 1971 version and The Isley Brother’s version from 1972. Shirelles’ version was also released as a single, with “Sunday Dreaming” as the B-side–the second cut on this album. The first side also includes “It’s Going to Take Some Time” (another number from Carole King’s 1971 Music album) with a solid reading of Bill Withers’ 1971 “Ain’t No Sunshine” and the Bee Gees’ 1971 “How Can You Mend a Broken Heart. Al Green’s 1972 version of the Bee Gees’ song might have inspired the version on this album, especially considering this is followed by an Al Green number to conclude the first side.  (Of course, it’s that the Isley Brothers and/or Al Green were inspired by the versions on this album.) 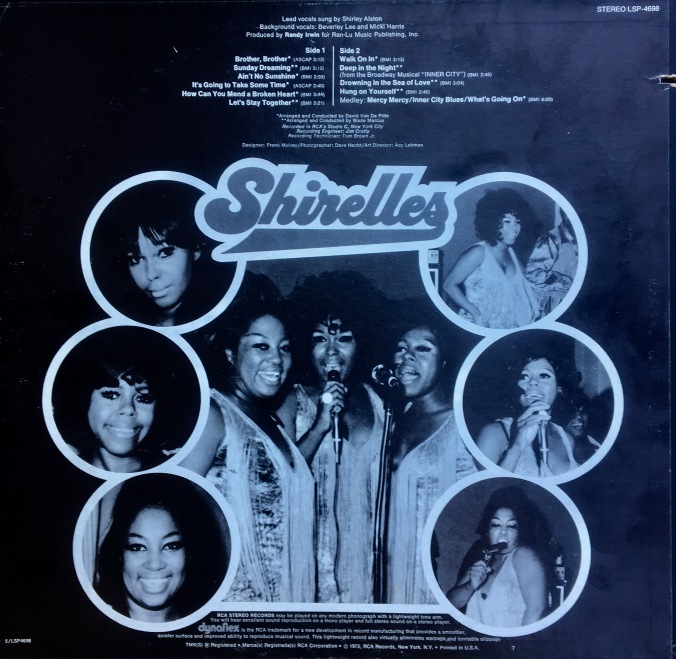 When you cover classics by the great soul singers (Al Green’s “Let’s Stay Together,” Joe Simon’s 1971 Gamble/Huff-penned “Drowning in the Sea of Love, Mary Clayton’s 1971 Carole King-penned “Walk On In” and Marvin Gaye’s 1971 “Mercy Mercy/Inner City Blues/What’s Going On” the listener can’t help from recalling the sharp bite of the originals, but if one lets go of all that and enjoys all these girls had offer, this offers plenty to enjoy. The band is uncredited but backs them up well, sounding like different line ups were perhaps used on different cuts, some arrangements by bassist David Van De Pitte (who arranged many Motown classics, including the What’s Going On sessions for Marvin Gaye), others by Wade Marcus (who was just beginning to make a name for himself in the worlds of jazz and soul), the set produced by Randy Irwin.